The Military Aviation Museum in Virginia Beach hosted the Virginia Department of Aviation and the Virginia Aeronautical Historical Society’s “Honoring Virginia’s Aviation Pioneers” reception this past Saturday, June 9, 2012. The gorgeous weather brought out over 120 award recipients, flying octogenarians, goverenment and airport representatives, and friends and family. 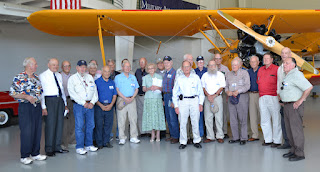 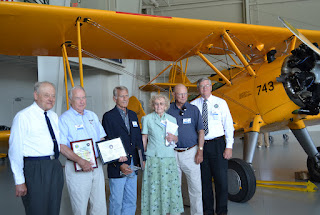 Also in attendence were members of the United Flying Octogenarians. More than 1,000 men and women, age 80 or older, make up the members of the United Flying Octogenarians (UFO). Although all members were still flying when they joined the UFO’s, most are no longer at the controls of an aircraft. The UFO is an international, non-profit organization with members in the United States including the U.S. Virgin Islands, Canada, Argentina, Australia, France, and the United Kingdom.

For more photos from the event, visit our Flickr page!
Posted by DOAV at 6:37 PM

Other Virginia aviation links to visit!