May 21, 2020 the transportation agencies put together some videos and activities to celebrate National Transportation Day. Staff members from the agencies are featured as a reminder of the many jobs that are in the transportation industry.
During its 2018 session, the Virginia General Assembly passed legislation that designates the Thursday before Memorial Day each year as Celebrate Transportation Day in Virginia.
Check out the web page created by Virginia Department of Transportation:
http://www.virginiadot.org/transpodayva/default.html

Posted by DOAV at 12:22 PM No comments: Links to this post

More people are ordering online and Wing Aviation has provided a solution to this rising demand. The company has partnered with two more businesses to add to the list of items its drones will deliver. Christiansburg’s Mockingbird Cafe & Bakery and Brugh Coffee have joined in partnership with the Google sister company.

Wing Aviation also announced that it will expand the pharmacy items available for order to include more medicines and food options. This is the first such drone delivery service in the U.S., but the company has sites in Australia and Finland, which already offer food and drink from local eateries. 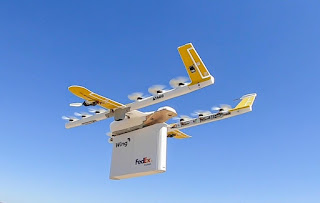 Posted by DOAV at 7:49 AM No comments: Links to this post 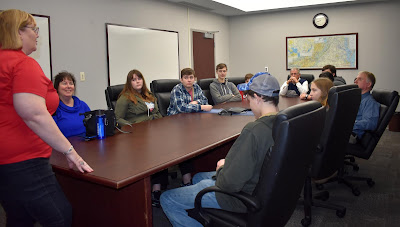 The DOAV PR team has been increasing the amount of aviation education and awareness across the Commonwealth by offering a Career Exploration Day to small groups of students in order to expose more youth to aviation. In support of this effort, PR Specialist Kim Wells hosted a group of home schooled students at the agency February 7th to teach them about the variety of careers in aviation. This was a shortened version of the usual program as the students had a busy day visiting numerous places around Richmond International Airport. Along with a couple of presentations, the career event consisted of the agency tour and a bonus tour of going next door to look inside Altria’s hangar. DOAV PR Manager, Betty Wilson, gave a presentation about the agency and explained the fundamentals of flight. DOAV Technicians Jeff Taylor and Greg Gilmour, showed the group what they were currently working on and explained how the engine works on the agency’s Cessna 182 and KingAir 350. The students were allowed to go inside the aircraft and learn how the flight controls operate. All photos taken by Kim Wells. 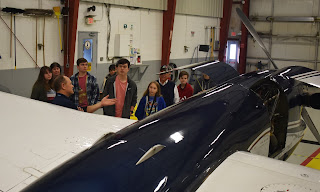 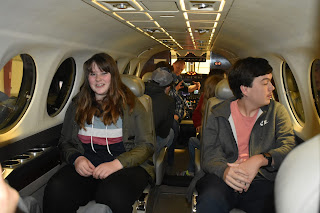 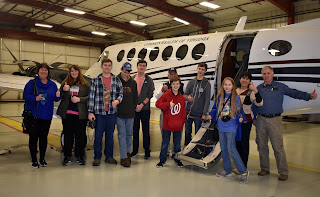 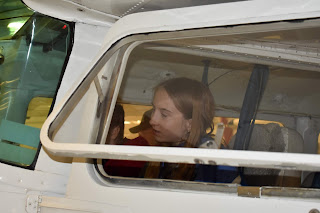 Posted by DOAV at 9:00 AM No comments: Links to this post 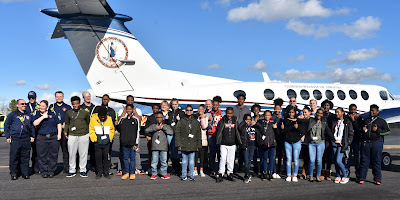 It was so much fun hosting the Aviation Career Event for the Omega Youth Academy in our agency Hangar Saturday, January 25. The program consisted of explaining the fundamentals of aviation, educational presentations as well as hands-on demonstrations for the students and adult chaperones.
Betty Wilson kicked off the event with opening remarks and a brief overview of the agency. The students were then broken into groups to visit four stations that showcased different aspects of aviation. Betty’s station focused on science and she had demonstrations about aerodynamics, water pressure and air pressers as well as an aerochart to explain flight planning. Alton Jordan’s station was about drones and the kids really enjoying watching it fly around the hangar. Alton is an engineer who also has a part 107 license so he can fly drones and help show the students the fundamentals of flight. He also gave a presentation about airports and engineering careers. Jeff Taylor staffed an aviation mechanic station where he showed the students the agency’s 182 engine and the work that was currently being done to the aircraft. David Cronk and Eddie Blanco staffed the airplane station that showed off the agency’s Cessna 206 and allowed the students to get inside the plane and see how the flight controls work. They also explained what it was like being a pilot for DOAV. Kim Wells gave a presentation about the variety of careers in aviation and took photos throughout the day.


Posted by DOAV at 8:23 AM No comments: Links to this post 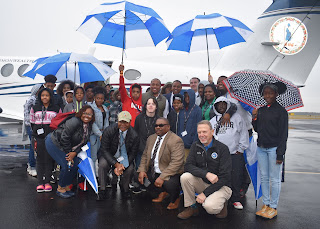 Aviation Career Day is a Success

The Virginia Department of Aviation’s PR Team held a Career Exploration Day in the hangar Friday, November 22nd for Martin Luther King Middle School students. The event included demonstrations from staff, presentations and guest speakers to help educate the students about aviation. Betty Wilson gave a presentation about the fundamentals of flight and explained how the agency’s Cessna 182 works while allowing the students to sit in the aircraft and see how the instruments work. Kim Wells gave a presentation about the variety of careers in aviation and took photos of the event. Andrew Crider explained how drones work and even did a demo in the hangar for the students. Jeff Taylor explained the role of aviation mechanics and had a hands-on demonstration for the students. The Richmond Airport Firefighters brought over one of their firetrucks and performed a water demonstration.
Guest speakers included Rod Hall, Chairman of the Virginia Aviation Board, Perry Miller, Richmond International CEO, Captain Sidney Clark, retired Chief Pilot from American Airlines and Justin Farifax, the Lt. Gov. of Virginia. The students were also treated to a brief visit from Governor Northam who arrived in the agency’s Beechcraft King Air 350 after returning from a trip. Thank you to all of our speakers and to the Richmond Airport Firefighters for your help and support to make this event fun and educational. 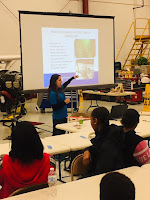 Posted by DOAV at 12:51 PM No comments: Links to this post 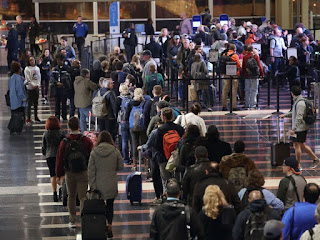 It’s that time of year where travel increases on the road and in the sky, so here are a few tips to help prevent extra stress and help you prepare for a busy travel season.
First, you want to avoid traveling on peak travel days. The Wednesday before Thanksgiving and the Sunday after are the busiest travel days of the year. While Christmas Eve and Christmas Day are lighter travel days, the weekend before or after Christmas is very busy. You may want to adjust your schedule if possible to help avoid extra delays. Spending extra time with family or taking time to visit the city you are in is a great way to unwind and avoid busy travel days.
Second, if you can’t adjust your travel days, then be sure to arrive very early to the airport. Most airlines recommend checking in 90 minutes early for domestic flights and two hours early for international flights. For holiday travel, however, it’s to your advantage to arrive even earlier. Expect to encounter long lines at check-in and security, expect traffic delays and plan accordingly. Many terminals are amenity-filled malls, some with art exhibitions, shops, restaurants and even spas and yoga rooms. Arriving hours early before a flight is a lot more pleasant when you know you can browse, savor a glass of wine, exercise or even get a massage. This also provides more time for you to adjust if your flight gets cancelled.
Third, you want to take advantage of shortcuts. Take advantage of technology and the latest self-service developments in online travel as they can be huge time-savers. Print your boarding passes at home or pull them up on your smartphone. Consider applying for trusted traveler programs, such as Global Entry or TSA PreCheck, which allow you to skip the normal security lines. Get a ride to the airport to save time and money. If you are driving yourself, fuel up or charge your vehicle the night before.
The fourth thing you want to do is pack wisely. Be sure to pack your own pillow or travel blanket to remain comfortable in case you encounter delays. For longer flights, consider bringing items such as earplugs, noise-canceling headphones, and an eye mask to help you sleep. If you buy most of your gifts online, have them shipped directly to your destination. This will cut down on luggage and the risk of them getting lost. If you do decide to pack your gifts, do not wrap them because TSA agents can rip them open if they need to screen them for any reason.
Lastly, you want to be nice. It’s that time of the year to be a little nicer than normal, and, so when you get frustrated with flight delays or traffic, getting stressed and angry won’t help. Other people are less likely to help you if you have a bad attitude. A smile and a positive attitude still go a long way, so keep your cool and be prepared to handle flight delays, cancellations and weather issues that you might face.
Enjoy traveling this holiday season and remember to take advantage of the time-saving tips mentioned.

Posted by DOAV at 1:17 PM No comments: Links to this post

With the 75th anniversary of the invasion of Normandy approaching, students and faculty from the aeronautics program at Liberty University have been working to restore a 1940s Aeronca L-3 “Grasshopper” plane for the National D-Day Memorial in Bedford that will be on display June 6th.
For several years, New London Airport founder and World War II veteran Rucker Tibbs would clean the aircraft and prepare it to be displayed near the reflection pool at the memorial. After Tibbs’ death in 2015, Bob Howell, chairman of Liberty University’s aviation maintenance technician school and his students stepped in.
Liberty aeronautics student Matthew Moyer said working on the L-3 will help him in the general aviation field after he graduates.
“It’s pretty practical experience,” Moyer said. “And it’s nice to work on something that will be on display. I wanted to play a part in getting that plane ready for D-Day.”
The students will learn about the history of the airplane as well as hone their skills in aircraft maintenance. The goal of this project is to keep the authenticity of the airplane during the restoration, but there will be a small change to paint scheme.
“The only thing we are going to do differently when we do the paint is put the invasion stripes on it to match it with the Normandy invasion,” Howell said.
The plane was donated by Morton Lester and has been on display at the National D-Day Memorial for about 12 years. This aircraft is very rare as it is one of only 19 surviving L-3 Grasshoppers, according to the Federal Aviation Administration’s aircraft registry.
The National D-Day Memorial Foundation is very grateful to have the Liberty University’s support with this project and the students are very excited to be a part of the restoration. Everyone looks forward to seeing the finished project on display this year. 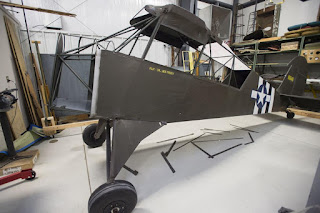 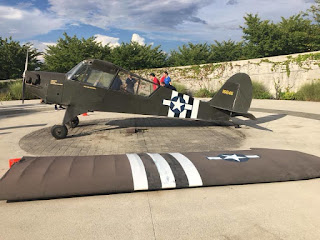 Posted by DOAV at 1:15 PM No comments: Links to this post

Other Virginia aviation links to visit!